Birmingham Heritage Week may be done and dusted for another year, but we’re passionate about our city’s history all year round. It would seem our tenants share that same passion: following our piece on our motivation for working on so many historical building restorations, we’ve been getting questions left, right and centre about which buildings we’ve worked on. We thought we’d go into more detail for you history buffs who couldn’t get enough of our Birmingham heritage work.

With 11 regenerations under our belts, we could go on forever about each and every one, but in the interest of keeping it short and sweet, we’ve narrowed it down to our top 5. Without further ado, here’s a roundup of some of our favourite property regenerations to answer some of your burning questions.

We’re proud to say that our work on the Branston Court offices earned us the Civic Award by the Birmingham Conservation Trust, and given the extensive efforts spent on the centre we’re very proud of that fact.

The site was in a bad state after sitting empty for 22 years before we took it on. When we initially began work, even council employees wouldn’t go inside for fears that it was unsafe, we even had 40ft trees growing out of the derelict parts of Hockley Terrace! Sadly there were hardly any of the gorgeous factory windows left that you see here today, so these had to be hand pulled using the original materials to replicate the real deal.

We’ve worked hard to retain that rustic look we loved so much, that’s why you can see quirky historic features throughout the site including old acid baths (that we’ve since converted into vases!), internal guttering and old factory windows.

Our second Jewellery Quarter office location used to be a metal workshop back in the day. The inhabitants of Regent Place used to spin metal for use in intricate structures and manufacturing, the remains of which can be seen in some of our tenant’s offices to pay homage to its former owners.

When the premises was no longer fit for purpose, it had been left in disarray. We saw the potential in Regent Place so we sent our team in who gutted and refurbished the whole building to its current state. As with the rest of our properties, we tried to keep as much of the old look and feel as possible from matching the old brickwork to repurposing old factory equipment.

Now the building is comprised of medium sized offices and stays true to its roots by being home to creative enterprises in and around the Jewellery Quarter. 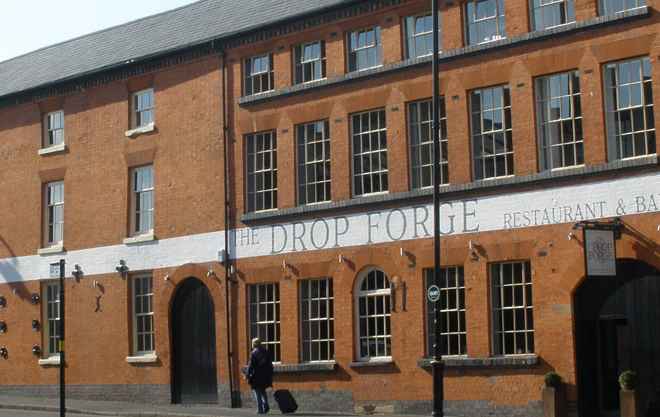 Arguably our most difficult endeavour yet, The Drop Forge on Hockley Street in the Jewellery Quarter was hailed by conservation architects as one of the most difficult civil engineering jobs in Birmingham at the time. As the old adage goes, nothing worthwhile ever comes easy!

As you may have guessed from the name, The Drop Forge was once home to a manufacturing works that had use of an old drop forge, which is now a prominent feature in the restaurant. The old factory actually had a railway tunnel beneath it, during our restoration work on the foundations of the building we discovered it to be 11ft below rather than 16ft as it was originally thought.

This caused all manner of havoc, particularly when an accident caused the tracks to become flooded at one point. After a lot of blood, sweat and tears we were eventually able to open the restaurant in 2010 where it swiftly became a firm favourite in the area and even won the CAMRA English Heritage Pub Conversion award before closing its doors to the public in 2017 so that hospitality companies could train their staff there.

One of our largest projects yet, the grand grade II listed Brandauer Building on New John Street used to be a pressings factory back in the 1800s before it was severely damaged by a fire in 2010. What drew us to this particular building was the vast array of different styles of architecture within. Due to various factors such as recessions, each part of the property was built years apart and has unique markers of that time period to show for it.

The inside of the Brandauer factory

We had to study each era and its architectural intricacies to understand how best to treat the individual areas of the building, so it was a real learning curve for us. To repair the fire damaged parts of the building, we reroofed it, worked on all floors and restored the brickwork as well as cast iron fixtures.

It’s important to us that all of our buildings be used to feed back into Birmingham’s economy, so we got the permissions to have the building turned into student apartments and recently sold it to a well know student accommodation provider.

Having owned this Victorian theatre pub for 29 years, originally called The Old Fox, its last refurb was a whopping 27 years ago. We’ve given it some much needed TLC over the past month while it’s been closed for refurbishment and have fitted it with new kitchens, a new bar and given the lounge a whole new look.

Working closely with designer Matt Rawlings and architect Keith Williams who’ve done a supreme job, the pub has undergone a transformation that we couldn’t have dreamt of.

Situated opposite the Hippodrome in the Chinese Quarter of Birmingham City Centre, we’ve decided to give the place a new name to match its new look – it now goes by The Sly Old Fox and will serve to be a new haunt for theatre goers and foodies alike.

Would you like to know more about UrbanWorkSpace’s passion for preserving Birmingham’s heritage? Drop us a comment and let us know.

How to Navigate the Birmingham Startup Scene

The Advantages Of Hotdesking In Business

Our UWS card has officially launched!